Governments should help MSMEs as a key to global economic recovery

Micro, small and medium enterprises (MSMEs) are the backbone of the economy, accounting for well over 40 percent of GDP in most countries. While MSMEs have always needed government support, COVID-19 has dealt them a devastating blow from which many may not recover. Various governments have announced economic relief packages, but these do not always address the real challenges MSMEs face to reopen and grow their business in the post COVID-19 world, where they may need to operate in different ways and with disrupted supply chains and customer relationships. In addition to economic support, MSMEs require access to digital skills and solutions to continue to operate in this new environment. Based on an international survey by Arthur D. Little, we have assembled a list of best practices in economic and digital support to ensure that MSMEs survive and grow in the uncertain future.

MSMEs are experiencing a survival crisis

The COVID-19 crisis has severely impacted businesses around the world, but the effect on MSMEs is especially acute. For example, the Organisation for Economic Co-operation and Development (OECD) has found that a third of MSMEs fear that they will be out of business without further support within one month, and up to 50 percent within three months. In the US, a survey conducted by MetLife and the US Chamber of Commerce reported that 43 percent of small businesses are likely to close permanently in the next six months.

Lockdowns and restrictions have drastically decreased, or even eradicated, the demand for goods and services in many sectors, such as hospitality, leisure, retail, transport, media and manufacturing. Consumer spending has fallen and could remain depressed for some time as a result of the economic downturn and continued fears of infection. Restrictions on workplace occupancy, along with workers who are ill or who need to look after dependents, reduces the supply of labor. Movement restrictions and uncertain breaks in production have also interrupted supply chains, leading to a scarcity of intermediate goods. In the meantime, fixed costs for items such as rental space, maintenance and insurance are not easy to reduce in the short term.

Unlike larger firms, MSMEs do not have the financial resilience to absorb negative cash flow and may not have ready access to new credit. Significant market failure is therefore looming for MSMEs. Moreover, they are not always recognized as constituting a huge part of the global economy, which is well over 40 percent of GDP in most countries. In fact, according to the World Economic Forum, MSMEs constitute 90 percent of all businesses and more than 50 percent of jobs worldwide. Governments therefore need to take direct and urgent action to support MSMEs.

MSMEs operate with often fragile financial positions. Lending institutions prefer to offer credit to large enterprises rather than MSMEs due to the higher risks that smaller firms carry, the lack of publicly available information on them, unfamiliarity with their products/services and lack of collateral. MSMEs also have a propensity to suffer payment delays from debtors, as they are often unable to negotiate advance payments from customers. For example, according to American Express, in 2019, around two-thirds of them claimed to be facing cashflow challenges from late payments.

While conditions have been improving in some regions as shown by reductions in bankruptcy rates, the financial position of MSMEs remains a barrier to growth as well as their Achilles’ heel. According to the World Bank, many countries face large financing gaps for MSMEs. In 2017, MSMEs’ financial gap was estimated to be USD 5.2 trillion, equivalent to 19 percent of the GDP of the countries covered in our analysis (IFC, 2017). Overall, financing for MSMEs remains a critical challenge that is strongly exacerbated under the current conditions.

Governments around the world have announced economic stimulus packages. Monetary support has been in the form of regulatory changes that incentivize financial institutions to be more willing to provide loans to businesses. However, as mentioned earlier, access may still be difficult in practice due to lenders’ risk policies and the bureaucracy surrounding the lending process.

Fiscal policies include credit guarantees, tax deferrals and relaxed administrative costs as well as direct lending, grants or subsidies. Some of these have only limited impact on the critical needs of MSMEs, for example:

An immediate fiscal impulse in the form of government loans, grants or subsidies is vital for MSMEs, to help them meet shortterm expenses. In our survey, we found that government direct spending on immediate fiscal impulse varies hugely - from zero to nearly 9 percent of GDP. Among the countries we analyzed, Singapore has topped direct government spending for MSMEs at 8.9 percent of GDP during the pandemic, including wage subsidies, working capital loans and specific grants for sectors most impacted. These responses have helped MSMEs retain employees, improve cash flow and cover costs of business operations. Canada also stands out, reporting 6.6 percent of GDP spent on MSMEs. Direct fiscal measures by leading countries have included lump-sum direct transfers to affected firms, subsidy of employee wages, raised unemployment packages, compensation for sick leave and rent subsidies.

Even with such measures in place, it is often challenging for MSMEs to access the support quickly enough due to red tape, poor implementation (e.g., lack of coordination with financial institutions) and/or lack of clear information. Some countries have created innovative solutions to address these challenges. For example, France, one of the top rankers in our fiscal stimulus index (see “About the survey” at the end of this viewpoint), has established a digital dashboard that helps MSMEs understand their financial options based on region, sector and department. In Canada, a hotline service helps farming entrepreneurs and small business owners access financial planning advice and information on options for public financial support.

However, due to the nature of the COVID-19 crisis, even substantial financial support may not be enough on its own to enable MSMEs to survive and regrow.

The COVID-19 crisis has forced enterprises of all sizes to accelerate digitalization of their operations. However, MSMEs often find it harder than large organizations to adopt teleworking, online retail channels and other digital solutions necessary to thrive in a post COVID-19 world. Prior to the crisis, penetration of digital technologies was poor among MSMEs. For example, in the last 12 months, only 22 percent of small businesses worldwide made e-commerce sales, and more than 75 percent did not have the necessary information technology capabilities (OECD Going Digital Toolkit). Three key elements inhibit MSME digitalization:

Given the unique circumstances surrounding the global pandemic that has made digitalization critical for survival – governments urgently need to provide support to fill the gaps.

In our survey, we found that government digital support initiatives for MSMEs tend to fall into three categories:

Provisioning of information and expertise can be accomplished through online training on specific digital solutions based on MSME economic sectors, or through consultancy services in the context of broader digital transformation. For example, Austria’s Federal Ministry for Digital and Economic Affairs launched the Digital Team Austria initiative, comprising companies in the digitalization industry and offering digital services to MSMEs free of charge for at least three months.

Grants and funding for digitalization initiatives may include subsidy payments to transition to digital e-commerce platforms or dedicated funds that provide grants or loans. In Germany, for instance, the government has set up dedicated funds for digitalization and ICT advancement of MSMEs. Similarly, Japan offers subsidies to support teleworking, adoption of IT solutions and developing e-commerce sales channels.

Ready-made solutions/platforms may be the most impactful category of digitalization initiatives, as these address multiple challenges simultaneously. Ready-made solutions can be in the form of equipment, connectivity packages, videoconferencing, collaboration platforms, digital payments, e-commerce platforms, IT solutions and cybersecurity solutions, among others. Such solutions reduce the need for technical expertise as well as capital required for in-house development or purchase of digital solutions. They may also provide strategic direction on how to engage in a larger, forward-looking digital strategy. In most countries we analyzed, most initiatives that support MSME digitalization are in the provisioning or enablement of ready-made solutions, with a focus on those sectors that have been the most affected and that have the potential to continue operating under remote working conditions.

In China, for example, the government has been providing support for MSMEs to migrate to cloud computing by purchasing collaborative cloud technology solutions that enable home office, online training and e-commerce. Similarly, the Italian government has established a portal where enterprises, particularly MSMEs, can register to access free digital services from large private-sector companies.

In Singapore, these solutions have been targeted towards helping sectors individually. For example, one program short-lists a series of technology solutions that MSMEs can implement to enhance specific tasks related to their sectors. The program includes a tailored list of solutions and finances up to 80 percent of the expenses related to purchase and implementation. Individual authorities are also supplying ready-made solutions for MSMEs: Singapore’s Infocomm Media Development Authority (IMDA) and Enterprise Singapore announced that they have preapproved remote working solutions that include laptops, while the Singapore Tourism Analytics Network provides access to updated tourism statistics to support recovery activities.

In Colombia, the focus is on creating virtual marketplaces, including forums where companies offer discounts and free services to help other businesses, as well as digital marketplaces for B2B and B2C. Ready-made solutions from the Colombian government include free online tools, digital payment tools and webpage development for businesses to enable MSMEs to maintain client communication channels. Latin America accounts for just two percent of global B2C e-commerce (IDB, 2020); thus, changing the mindset requires a vast push from governments.

Other leading countries in our survey, like Austria and Malaysia, have focused on providing digital platforms as well. In Austria, several regional online platforms promote products online. In Malaysia, the government is developing a digital marketplace to allow smaller suppliers to work with government for procurement.

The figure below shows further examples of support initiatives across the three categories.

What should governments do going forward?

Overall, our survey showed that although some governments have initiated a push to accelerate MSME digitalization, there is still more to be done. Governments could benefit from sharing information internationally on what is and is not working.

Governments need to ensure they are providing MSMEs with the right type of financial support for survival – especially loans, grants or subsidies – with a minimum of delay and red tape. They also need to do more to support rapid MSME digitalization, recognizing the unique impacts of the pandemic. As MSMEs realize the benefits of digital solutions, it will be easier for them to invest further in a virtuous cycle. Wherever possible, governments should leverage private-public partnerships and build ecosystems to attract investors to grow digitalization for MSMEs.

Most importantly, governments must act now and act fast. If not, the damage to global economic recovery could be huge – even as much as 20 percent of GDP in the short term.

Arthur D. Little surveyed approaches used in government financial and digitalization support for MSMEs across 30 countries in Asia, Europe, the Middle East and the Americas.

An index was developed to roughly rank government fiscal stimulus based on two parameters:

Scores were added to provide an index score ranging from a minimum of 2 to a maximum of 8 (see table below). 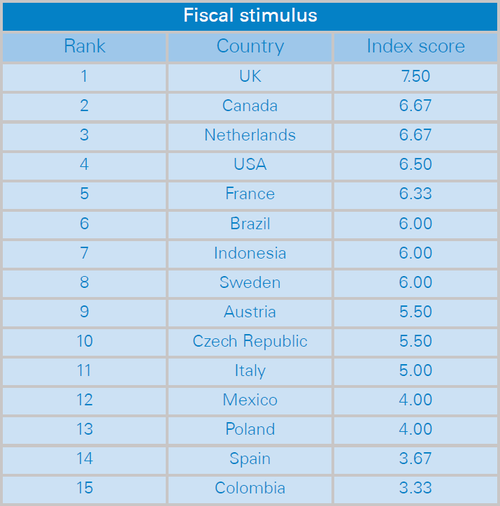 We focused on identifying best practices in digitalization support. Although we initially considered a single digitalization support index, we rejected this approach due to the difficulty of assessing the quality and quantity of diverse initiatives across different countries, as well as the varying levels of digital maturity in countries.